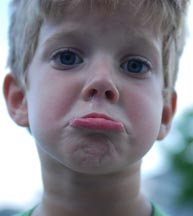 You're climbing the stairs from the basement with a basket of laundry in your arms when suddenly three-year-old Timmy flops down on a stair, refuses to budge, demands to be carried and then lets out a wail that registers a 10 on the Richter scale.

What should you do? Carry him? Punish him? Lecture him? Bribe him?

"Step over him. Then calmly tell him you'll see him upstairs," suggests Aviva Schwab the reputed "STEP" Mother of the Hudson Valley. During the past 14 years Schwab has conducted STEP (Systematic Training Programs for Effective Parenting) classes for parents, parents-to-be, single parents, grandparents, teachers ... just about anyone interested in raising happier, more independent children. "Recently, a single man who simply wanted to get along better with his nephew took the course," Schwab relates.

"When kids cry and throw tantrums they're really giving Oscar-winning performances to gain attention," says Schwab. Instead of taking part in the drama, STEP lets parents have a seat in the audience.

"STEP training enables us to understand the goal of misbehavior and learn not to take it personally," Schwab explains. For example? "When kids cry and throw tantrums they're really giving Oscar-winning performances to gain attention," says Schwab. Instead of taking part in the drama, STEP lets parents have a seat in the audience. "Some STEP graduates have told me they've come to appreciate their children's acting ability and now find it hard not to applaud," she adds with a smile.

Which doesn't mean that STEP doesn't take misbehavior seriously. It simply puts it in perspective. It teaches parents why criticism and punishments don't work and helps parents learn to give logical consequences instead of punishment. "The consequences must fit the crime," says Schwab. "We wouldn't expect to be given the death penalty for a speeding ticket, yet we often assign the same type and degree of punishment to each infraction."

An important part of the course is understanding the parents' reactions to their children's behaviors. "STEP teaches us to act rather than react," Schwab explains. "We react when we take misbehavior personally," says Schwab. "We act when we know what to do."

What could you do if your child comes home late for dinner? "Tell him you missed him. Then let him fend for himself and find something cold to eat," Schwab recommends.

Easy to say but hard to do? Yes and no. "Parenting is a difficult job, it pays nothing and most of us have had no training for its complexities," Schwab agrees.

However, life with children needn't be overwhelming and confusing. "When parents get angry, it's usually because they don't know what to do," Schwab explains. STEP gives parents a course of action-it tells them what to do and shows them how. "It is possible to give positive guidance rather than punishment," says Schwab.

When Richard Fuchs, a pediatrician in Middletown-a doctor, husband, and father of two boys and a girl-took Schwab's STEP course, he was certainly no stranger to the theories of effective parenting. But he enjoyed the opportunity to learn new techniques for applying the theories.

"When I'm complimented on how exceptional my kids are, I have mixed emotions. Naturally, I'm proud, but at the same time I'm also worried about their generation. Thoughtful and responsible young people should be the norm...not the exception," Schwab maintains.

According to Fuchs, parents see immediate results when they practice STEP with their children.

"In my pre-STEP days, if my kids were wrestling upstairs and suddenly came down crying, I would have first made sure no one was hurt. Then I would have listened to the details, determined who was most at fault and intervened," says Fuchs. "After STEP, I'd still make sure there were no injuries. Then I'd stay out of it. I'd probably say . . . since I wasn't there to see what happened, it doesn't make sense for me to take sides. You kids will have to go back upstairs and work it out on your own." And they do. "Five minutes later the conflict is usually forgotten," Fuchs adds.

Aviva Schwab was studying child development in graduate school when a classmate lent her a book-THE PARENTS HANDBOOK: SYSTEMATIC TRAINING FOR EFFECTIVE PARENTING by Don Dinkmeyer, Sr., Gary D. McKay and Don Dinkmeyer, Jr. The book not only changed her life, it became her life. Pregnant with her second child, Schwab was able to put the STEP program to work at home. After her second son was born, she continued the approach. She saw noticeable differences between her children and others. The parents of other children saw differences too.

The Schwab boys played independently and happily while many of the other children ran to their parents to settle disputes. Schwab's advice was in demand and she was delighted to share her understanding of the system with her friends. Eventually she sent for the materials-workbooks and tapes-which would enable her to formally instruct the course.

Schwab's children have grown and blossomed under the nurturing guidance of STEP. Now 17 and 20 years old, they often come to STEP classes and talk about STEP from their perspective.

"When I'm complimented on how exceptional my kids are, I have mixed emotions. Naturally, I'm proud, but at the same time I'm also worried about their generation. Thoughtful and responsible young people should be the norm...not the exception," Schwab maintains. "I know every single child can benefit from STEP...I wish it were available everywhere . . . I wish it could be in the water."

During the past two decades, Schwab has given parents throughout in the Mid-Hudson region a foundation upon which to build stronger relationships with their children. One of those parents is Alice Fogarty of New Paltz, a mother of three. Fogarty didn't want to be the kind of parent who screamed and nagged at her children, but when faced with the reality of everyday child rearing, she found it was difficult to stick to her ideals. When she considered sending her children to nursery school she didn't like a lot of what she saw. "In one school there were two boys . . . about three years old . . . who were constantly given time out. At three, they were already labeled bad boys. I knew there had to be a better way."

For Fogarty, the STEP program was the way. "STEP doesn't make everything perfect," says Fogarty, "but it makes a lot of things easier." Fogarty points out that she is no longer drawn into every argument. She now expects her children to settle disputes on their own . . . "They also lay out their own clothes the night before school and take responsibility for a lot of things I once thought it was my job to do."

Her youngest son recently developed the habit of dumping his plate of food. Rather than charge into a losing battle, Fogarty now removes the food and says "I see you're not hungry. We'll try again later." STEP helps parents focus on the ultimate goal-raising healthier, independent, more responsible children. "Some of the behaviors may still be the same . . . but my reaction to them is different," says Fogarty.

Fogarty confesses that she doesn't always apply STEP techniques even though she would like to-"I use it about 80% of the time, but my percentage is growing," When she's backsliding, she calls friends who have taken the course and they try to imagine what Aviva would say.

Occasionally she'll call Schwab for an informal STEP pep talk. The STEP program meets once a week for nine weeks. Each session focuses on specific skills and techniques. Parents can come as a couple or individually. Having both parents take the course is preferable, but Schwab maintains children still benefit when only one parent attends. Attendees are welcome to ask specific questions about their own children and share experiences.

The following parenting skills are
taught in STEP classes:

Gloria Smith is a freelance writer and the mother of two teenage boys.